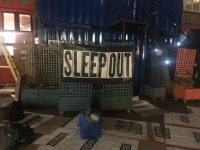 Last week a group of us from the Social Care and Marketing teams joined around fifty other people to take part in the ‘Sleep Out 2018’ organised by 1625 Independent People.

The charity supports young people aged between 16 – 25 who are either at risk of becoming homeless or are homeless already.

The aim of ‘Sleep Out 2018’ was to provide us with a small introduction into what it would be like to be homeless. For one night, we left behind our creature comforts to trade in our soft, comfortable beds with big fluffy pillows and warm duvets for a hard-concrete floor, yoga mats and sleeping bags.

Although we did sleep outside all night, we were in a secure enclosed area, we were lucky with the weather as it didn’t rain and most importantly, we were not alone.

During the evening, 1625 Independent People spoke about the hardships young people face today, many of whom sleep rough at night and then go into work the next day.

We were privileged enough to enjoy performances and talks from some formerly homeless young adults, who the charity has helped, sharing their own personal stories of how they came to live on the streets and how the charity and its workers have helped them to turn their lives around since then. One memorable young woman performed a poem in the style of a rap and another, now a lead singer of a band, finished off the night for us with some very moving ballads.

As we bedded down for the night, trying to get comfortable, it gave us peace of mind to know that we had companions close by. After what felt like a very long night, of tossing and turning and trying to keep the noise and cold out, we finally awoke the next morning to head back to our jobs, feeling tired, sore and dirty. It’s safe to say it wasn’t our most productive day of work.

With around 85,000 young people facing homelessness very year in Britain it is not hard to see why 1625 Independent People’s charity is so important.

The organisation gives young adults a network of people they can trust – including support workers, connection with other young people who have had similar experiences and aspirational community mentors.

The young people are offered opportunities they’ve never had; to try things out, to get to know themselves, their strengths and aptitudes and to contribute positively to their communities.

So far, the night has raised £42,000 for the vital services that 1625 Independent People provide. Well done to everyone who took part and a big thank you to all the people who donated! 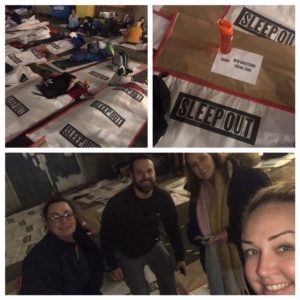 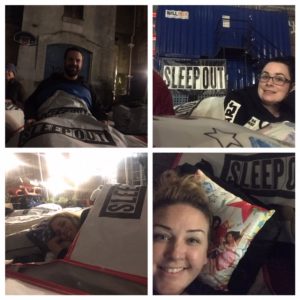