Caring for someone with dementia

Many of us know of someone who has been diagnosed with Alzheimer’s or dementia, whether that’s a friend, neighbour, family member, or through our field of work. Globally, the number of people living with Alzheimer’s and dementia is on the rise, which means more of us are caring for someone with dementia. It’s estimated that figures will rise from 50 million cases around the world in 2018 to a staggering 152 million in 2050 putting greater pressure on the social care sector. That’s a predicted increase of 204%, marking Alzheimer’s and dementia as one of the most pressing global health concerns of our age. 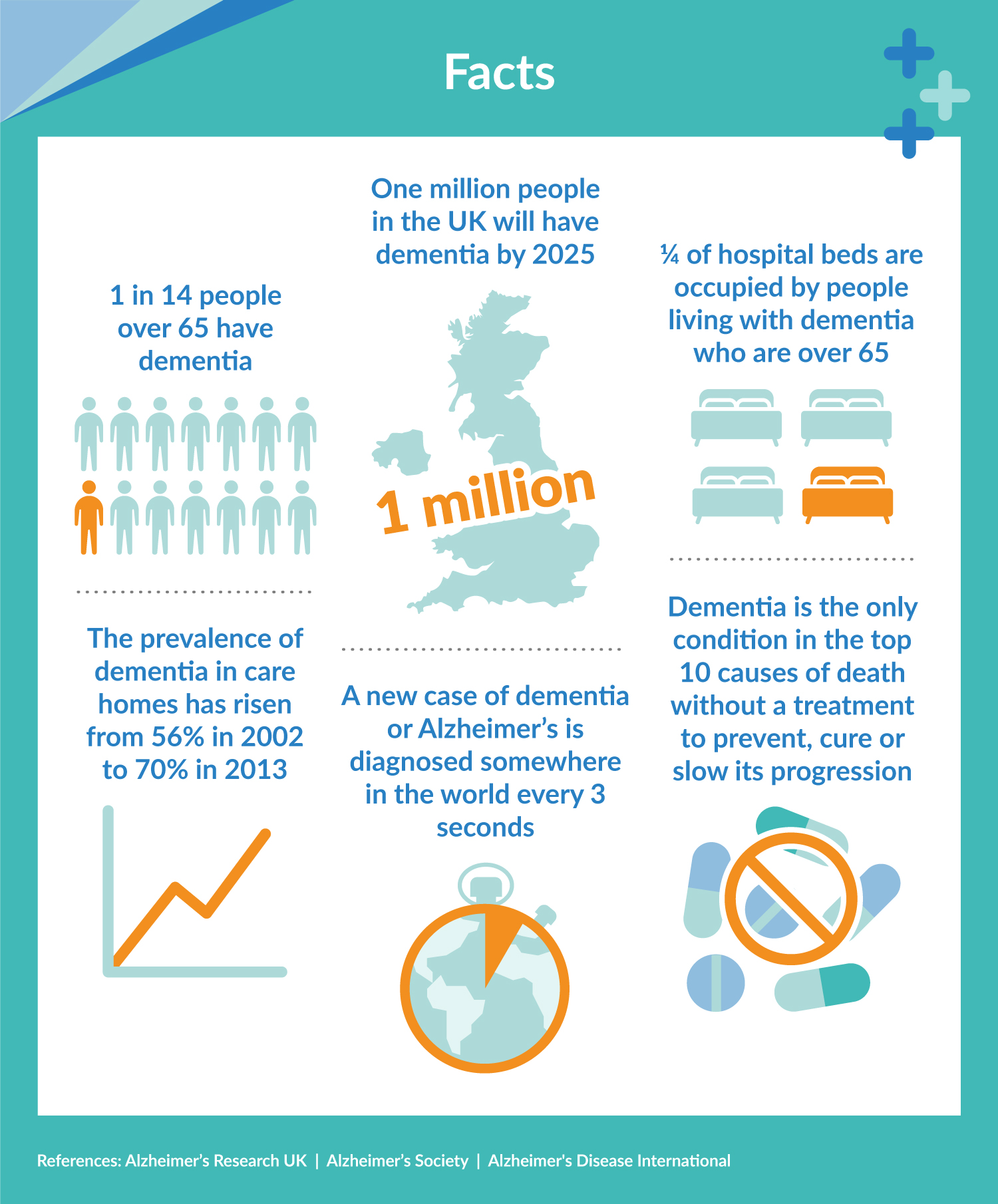 World Alzheimer’s Month – caring for someone with dementia

A diagnosis of Alzheimer’s or dementia can be life changing for a person and their family and friends, at whatever age it is diagnosed. Therefore, knowledge and recognition are crucial in tackling any stigma associated with it, developing an understanding of the disease to help people cope with their diagnosis, and caring for someone with dementia.

September is World Alzheimer’s Month – a campaign to raise awareness of the disease and tackle any stigma associated with it. The aim is to get people talking more openly about dementia and Alzheimer’s, helping to improve understanding of the disease and support those living with it. Here’s some useful information to get you started… So, #LetsTalkAboutDementia

Dementia is the term used to describe symptoms like memory loss and difficulty thinking, problem solving and communicating. Although many people think dementia is just forgetfulness, it actually covers a range of other symptoms too. When caring for someone with dementia, you might come across symptoms  including: 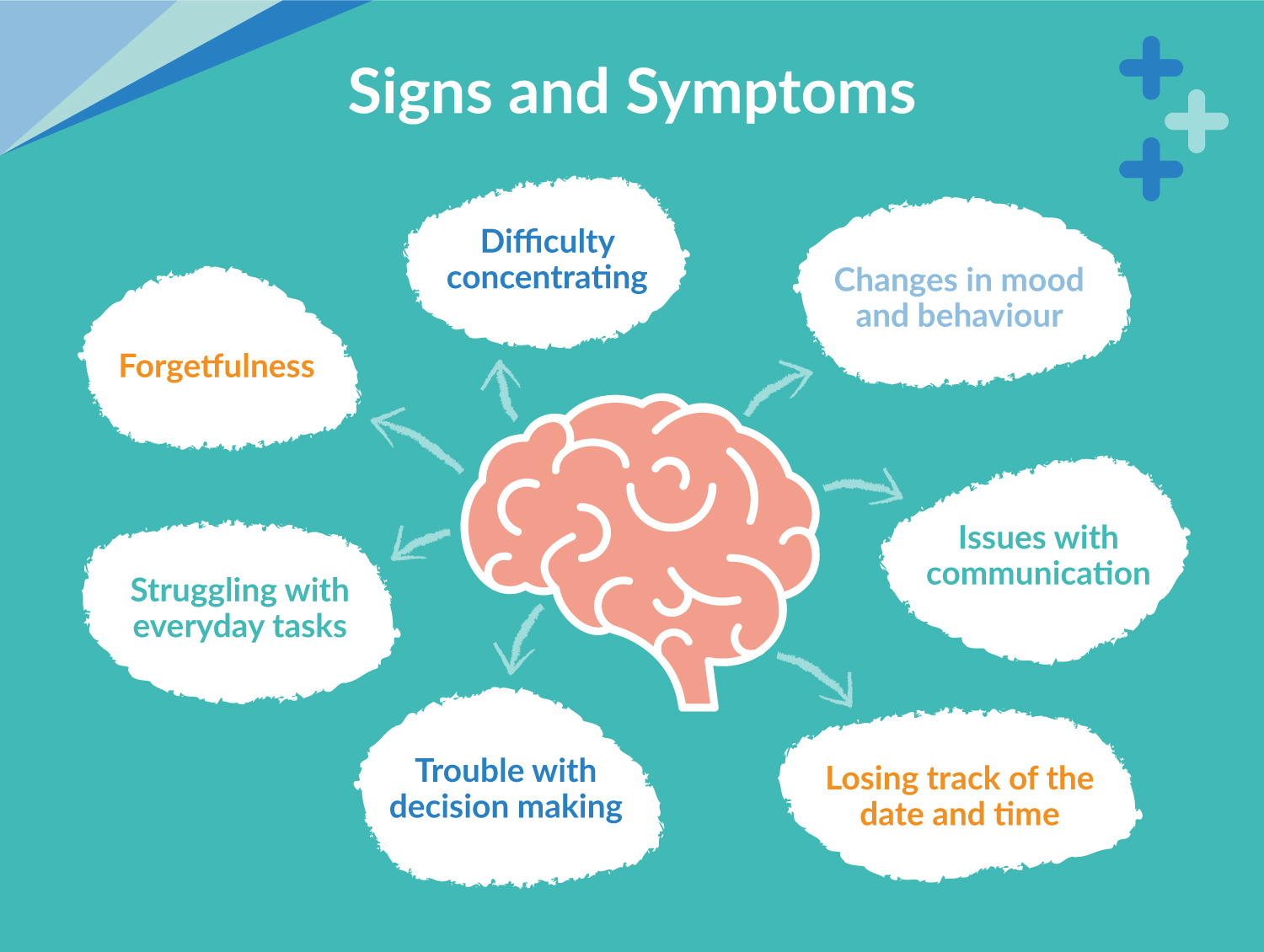 Although it is not a visible illness, dementia is a progressive disease of the brain that comes in different shapes and sizes. Each type of dementia may have slightly different symptoms and underlying physiology, which is important to understand when caring for someone with dementia:

Despite it being such a prevalent disease, there is currently no known cure for dementia. In the UK, dementia is the only condition in the top 10 causes of death that has no cure. We can only manage symptoms and continue with vital research into a cure for the future.

There are a range of treatments that can help to manage symptoms of dementia which may be more effective for some individuals than others. Drugs are available to help with some types of dementia, but medication may not be the best approach for all dementia sufferers. Other therapies such as counselling, Cognitive Behavioural Therapy, cognitive stimulation and cognitive rehabilitation may be more suitable. It has also been shown that life story work and sharing memories can be beneficial, alongside music, singing, art and keeping physically, mentally and socially active too.

Although there is no cure, research is being carried out by organisations like Alzheimer’s Research UK and The Alzheimer’s Society and we hope that one day, a dementia diagnosis will have a completely different meaning and prognosis. In the meantime, these charities offer information, advice and support for dementia sufferers and their families, and they are vital resources for many who are caring for someone with dementia.

Craig’s first-hand advice for caring for someone with dementia

Everyone’s experience of Alzheimer’s and dementia is different, and every person diagnosed with the disease will follow their own unique journey. This means that what works for one person may not be beneficial for another, which is something that many carers discover when they are caring for someone with dementia. Craig from New Directions has experienced Alzheimer’s in his family several times and he shares some of the practical tips and advice that he found helpful to cope with the diagnosis:

In the early stages, I think it’s important to be led by the sufferer as to what they can/should do.

All three people who I have seen suffer with Alzheimer’s reacted in very different ways, and so there was no point trying a one-size-fits-all approach. They may be desperate to hold on to as much independence as they can and will be determined to do things for themselves for as long as they can. It’s tempting to try to treat them almost like children straight away because you know which way things are going, but I think this leads to a lot of frustration and upset for them if they want to maintain their independence for as long as possible. On the flip side of this, I found my grandmother just kind of shut down, almost like she gave up straight away. We tried to encourage her to do things, but she just wanted to be looked after. So, in short, my advice is to be led by the sufferer and try to be sensitive to the way they deal with the news.

Take whatever help you can, as often as you can!

It seems obvious, but I think a lot of people feel guilty about accepting help to look after their loved ones, almost as if they feel they are passing them off as somebody else’s problem. The truth is, trying to look after someone with Alzheimer’s (while dealing with your own emotions around the situation) can be absolutely exhausting and emotionally devastating. If someone offers to sit with them for a couple of hours for you to go out, do it! If you can find a support group, get involved with it. If there is a volunteer to help in some way, accept the help. If you find someone to speak to about how you are feeling, speak to them. Because the truth is, even though your loved one has had the diagnosis, it is going to impact you and everyone around you, and it’s ok to admit that you are hurting and that you need help.

Involve them in things as much as you can and don’t avoid talking to them.

I saw some family members who felt awkward about speaking to someone who was ill because the conversation could be so erratic and unpredictable, or you may end up having the same conversation over and over again as their memory begins to deteriorate. But a day will come when you won’t be able to spend time with them anymore, and it can be a horrible feeling to realise that you didn’t spend as much time with them as you could. It’s just like with any illness – be intentional about spending time with them while you are able to and don’t shy away from time together just because you might find it difficult. They need to know that you still love them.

Realise that at some point, there will be difficult conversations – if you can’t have them yourself find someone who can.

My father in law, in particular, has always been a very capable, very independent man. My mother in law doesn’t drive, so he was solely responsible for getting them around. But we realised one day that it was no longer safe for him to drive anymore. On one occasion, he was having a particularly bad day and his concentration wasn’t great. They were on the way to do some shopping (a journey he had made hundreds of times before) and he got lost. When my mother in law tried to give him directions, he couldn’t follow what she was saying and almost went through a red light. We had to sit him down that evening and tell him that he had to give up his license and his car, and to him that was a huge blow to his independence as he would have to rely on us to get anywhere. He tried to convince us that it was just a one off and got quite upset. My mother in law and wife got upset because of how it affected him too, but to let him carry on driving at that point would have been dangerous for him and for others. It’s horrible when you have to start making difficult decisions for your loved ones, which is why (as early as possible) you need to find someone you can rely on to have those conversations when the time comes.

If you need further advice and support with dementia or Alzheimer’s, Craig recommends taking a look at all the useful information available on the Alzheimer’s Society website. He found it to be an invaluable resource and they have a National Dementia Helpline available on 0300 222 1122 if you ever need a friendly ear.