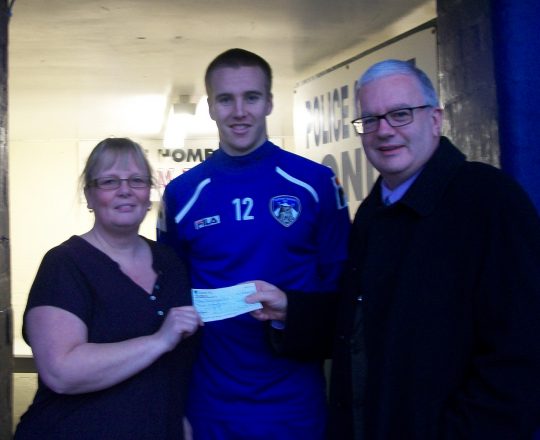 New Directions Education was delighted to be able to support Oldham Athletic Football Club’s Community Trust scheme recently by helping with sponsorship.  The Football League Division 1 club who organise a year round programme of activities for schools recently hosted two 6-a-side tournaments for schools  across the borough.

The Primary School tournament which involved nearly 30 schools resulted in eight teams progressing to the Kid’s Cup finals to be held at the club’s Chapel Road training base in January.  The finals will be fought out between St Joseph’s from Shaw, St Paul’s in Royton, Richmond, Mills Hill, Hodge Clough, South Failsworth, St Chads and Greenfield St Marys.

In the Oldham Athletic Girls Cup competition six secondary schools from across the borough played out an exciting and skilled evening of football which resulted in Oasis Academy emerging as winners.  Oasis now go on to represent Oldham in the regional finals in the New Year.  The sponsorship enabled trophies and medals to be provided for the winning teams and certificates for all involved in both competitions.

Wendy Noble, Oldham Athletics’ Trust administrator said “I am delighted to work alongside New Directions Education.  Both organisations work with primary and secondary schools, so the decision to work together seemed a natural and logical progression.  This is part of the long partnership between ourselves at the Trust and New Directions.”

Amanda Stothard, New Directions Manchester account manager said, “As a company we are always keen to support grass roots work that involves the schools we work with.  Our head office in Cardiff has had a long tradition of hosting competitions with Cardiff City F.C., and  Manchester is following.  Well done to all the schools and players who took part.”  New Directions Education with branches across England and Wales provides recruitment, staffing and training services to all sectors of the education service,

Wendy Noble is pictured along with first team regular David Mellor, receiving the sponsorship cheque, from New Directions Education’s Stuart Ash as the team prepared for their FA Cup victory at Mansfield.