And the winners are…

New Directions Education was delighted to support Tranmere Rovers Football Club for the second year running in their Community scheme by sponsoring their local primary schools boys’ football tournament.  This years tournament was just as exciting as last year and the boys were so enthusiastic to participate.

The qualifying matches were played at Pensby High School over four nights where the 34 teams were whittled down to nine. The finalists were St Joseph’s Catholic Primary in Birkenhead, Christ the King Primary, Somerville Primary, Gayton Primary, Poulton Lancelyn Primary, Woodlands Primary in Ellesmere Port, Our Lady Star of the Sea, Woodchurch Road Primary and Higher Bebington Junior School.

The schools fought it out at the same venue on November 8th for the honour of representing Wirral Borough with the chance to play at Wembley Stadium. After some extremely competitive football Poulton Lancelyn emerged as winners, seeing off local rivals Christ the King in a close fought final.

On final day the weather was abysmal with rain forecast all evening, however the teams pulled together and showed a united front and seemed resilient to the weather conditions!  There was also a fantastic turn out of parents on the side line cheering the children on. The team from New Directions Education in Liverpool was also present to cheer on the teams! New Directions sponsorship meant the finalists all received medals and trophies, with certificates presented for all who took part.

Steve Williams, Tranmere’s Community Manager said “Tranmere Rovers Football League Kids Cup Supported by New Directions produced an exciting finale. Nine teams took part in the final stages with some excellent football on display from the youngsters. This culminated in a tense final with Poulton Lancelyn edging out Christ the King by 1-0 scoreline. Congratulations must go to Poulton Lancelyn who will represent Tranmere Rovers in the area finals at Crewe. A big thank you to New Directions Education for supporting the competition.’’

Mrs B Gratehead, Head Teacher at Poulton Lancelyn commented “Thanks to New Directions and Tranmere Rovers for a fabulous event. Our pupils thoroughly enjoyed the competition and as winners, were obviously delighted with the end result!”

Kevin Doogan, Head Teacher at Christ the King added “The pupils thoroughly enjoyed competing against other schools over two nights at Pensby High School. All matches were keenly contested and we were delighted to make the eventual final. Congratulations to Poulton Lancelyn Primary School who narrowly beat us in the final. Best wishes to them when they represent Tranmere Rovers in the next stages of the competition. Thanks to organizers and sponsors for a marvellous event”

Sandra White, who is the Account Manager at New Directions Education commented “I really enjoyed watching all the schools who participated in the Tranmere Football Tournament, Football is a big part of my life and I am always happy to stand on the side-line cheering the teams on.  It was also a great opportunity to meet with the head teachers, teachers and parents and generally be involved with the great buzz this game brings to the children’s lives’’. 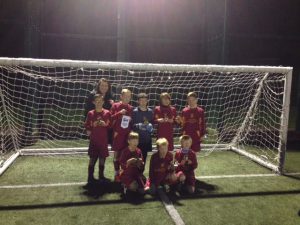