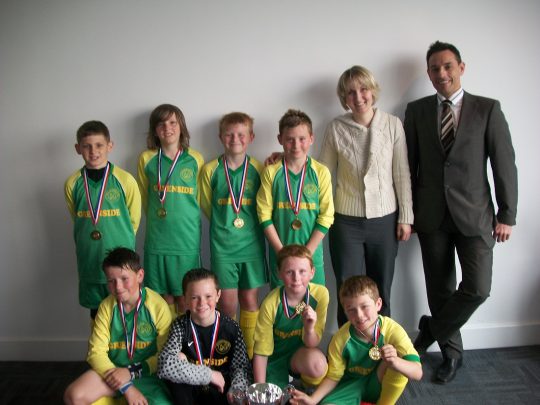 Stockport County Community Sports and Education Foundation were seeking a sponsor for their Tameside Cup soccer six a side tournament. The annual primary school competition is an opportunity for the children from Tameside and Stockport to put their skills to the test by taking on other schools in the area.

When New Directions Education in Manchester heard of their plight they were delighted to support the event.

The company have a long tradition of supporting primary school football in Wales, where they have their headquarters, and wanted to extend the scheme to other areas around their branch offices.

Mike Smith, Stockport County’s Community Officer said ‘’ We are delighted to work with New Directions Education in holding our Under 11’s Community Cups in Tameside, Stockport and the High Peak, giving local children the chance to play in a structured competitive tournament. Our thanks go to everyone at the company.’’

The qualifying matches were played at Astley Sports College, over two days either side of the Easter holidays where after exciting rounds of very competitive matches over thirty teams were whittled down to two finalists.  Greenside and Flowery Fields emerged as the two teams to fight out the final on May 20th at Stockport Sports Village at Woodley for the Tameside Cup.

After some football of a very high standard Greenside Primary emerged as winners, seeing off their local rivals in an end to end thirteen goal thriller. New Directions Education sponsored the trophies and medals as well as certificates for everyone who took part.

Gareth Beaumont, Branch Manager for New Directions Education Manchester was delighted at the success of the tournament and commented ‘it was a real pleasure to support the Stockport County Community Sports and Education tournament, the tournament was a chance for the schools we work with to have the opportunity to play football with other local schools. At New Directions Education we recognise the positive impact we can have by working with our local community, we are committed to supporting our local communities.